At the press conference following the US Federal Reserve (US Fed)’s most recent interest rate decision, Governor Janet Yellen made an admission that marks a significant change in tone from the US Fed.  She acknowledged that the debate over whether to raise inflation targets is “one of the most important questions facing monetary policy”[1], and encouraged further research. While we still believe there is a low chance of the US Fed’s inflation target actually being raised, the implications of this tail-risk are complex and far-reaching for economies, financial markets and investors.

The rationale for raising inflation targets

There are valid arguments for central banks to raise their inflation targets, in light of experience over the past 25 years of central banking.

The main idea is that raising inflation targets would also lift the level of neutral interest rates, as investors would seek to be compensated for higher inflation. This in turn, would mean that central banks would have more bandwidth to cut official interest rates to stimulate the economy when the next recession comes around. One of the key lessons of the Global Financial Crisis (GFC) was that, with 2% inflation targets, the zero-bound for nominal interest rates ended up restricting central banks in the US, UK and Europe much more quickly than expected. With no room left to cut interest rates, they were forced to revert to unfamiliar and untested tools like quantitative easing. While New Zealand and Australia avoided this predicament, at 1.75% and 1.50% respectively, official interest rates are much lower than ever imagined pre-GFC. 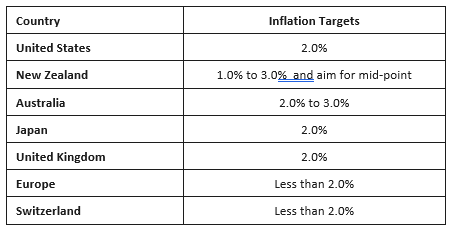 If inflation targets were raised (to, say, 3% - 4%), the zero-bound for interest rates would become less restricting. At the same time, research suggests that there would be little cost to economies if inflation ran at a marginally higher level. It is worth noting that no one appears to be advocating a return to the high and variable (5% - 20%) inflation of the 1970s and 1980s, which created uncertainty for businesses and consumers that eventually inhibited economic activity.

This idea to raise inflation targets by a modest amount is not new. It was first floated in 2010 in the immediate aftermath of the GFC by Oliver Blanchard, the former IMF Chief Economist. However, until recently it has been largely ignored as a theoretical distraction, for a couple of reasons.

First, central bankers in the US, UK and Europe have been much more focused on the immediate practical challenge of navigating their economies out of the Great Recession. Revisiting the arguments for where to set the inflation target did not seem like the top priority. Second, central banks were having enough problems even achieving their 2% inflation targets. So lifting inflation targets to an even more challenging 3 to 4% may have risked undermining their credibility. The Bank of Japan has provided a small glimpse into this problem. In September 2016, the Bank of Japan introduced a new policy of committing to overshoot their 2% inflation target. Yet without ammunition to deliver on this goal, it has been interpreted as little more than fighting talk, and Japanese inflation remains stuck below target. 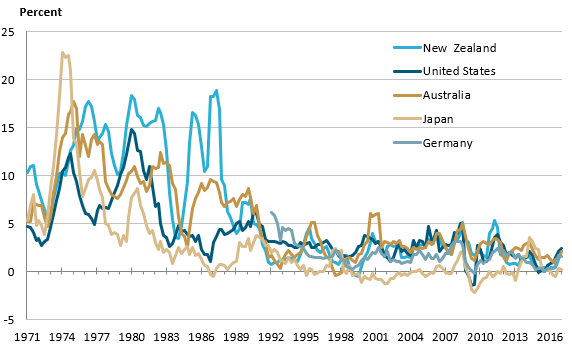 The current state of debate

For a number of years since the GFC, policy makers at the US Fed have been downplaying the debate about raising inflation targets, so it was a surprise when in response to questioning Janet Yellen appeared more open to considering the issue.

There are a couple of things that may explain the change of tone. First, the passage of time means that the immediate challenge of dealing with the GFC is further behind the US Fed. Indeed, the US is further along the economic cycle than other parts of the Western world, such as the UK and Europe. Since the end of 2015, the US Fed Funds Rate has been raised four times, and the US Fed have released a plan for how to reduce their balance sheet later this year. With that the case, it becomes timelier to consider inflation targets in a post GFC world. Second, the drum beat from academics and former policymakers has become louder, with 22 prominent economists signing a letter that urged the US Fed to raise the inflation target (including Nobel Prize winners, former US Fed regional Presidents, former White House advisers, and former Bank of England MPC members).

Despite this becoming a more active debate, we still believe that the chances of the US Fed officially raising the inflation target over the next 5 years reminds low, in the order of a 10-15% chance.

As a key part of the macroeconomic policy framework, there is a strong resistance to tinkering with the inflation target without a serious amount of research, discussion and consultation. Furthermore, we see this as part of a wider debate across G10 economies. The United States would be more inclined to raise the inflation target to 3% to 4% if that was also being actively considered in Canada, the UK and Europe.  However, it is further off the radar in those countries, and there is likely to be strong resistance from places like Germany who see themselves as guardians of price stability.  In New Zealand it is even further off the policy agenda, given that the zero-bound for interest rates did not bite in this part of the world, as it did in Europe and North America.

While raising inflation targets is a tail risk rather than a central scenario, it is worth considering the implications for markets, which would be wide ranging and evolve through time.  In some cases the immediate impact of a change in inflation target would be different than the long-run impact.

The first is that the whole level of the yield curve should be higher, to compensate for higher inflation expectations.  In a sense, this is the primary objective of the exercise, to provide more bandwidth to cut interest rates in a recession.  But the yield curve may also be steeper, as investors seek more compensation for inflation risk and uncertainty over longer horizons.   Over the long-run, a higher inflation target should continue to weaken the US dollar, as its purchasing power erodes more quickly through time with a higher inflation rate than its trading partners.  Finally, the impact on equities is ambiguous.  On the one hand, higher inflation should lift nominal GDP and earnings growth, and investors are likely to favour real assets like equities in a higher inflation environment.  However, if inflation rises to a level to where it becomes too uncertain and unstable, then equity markets may get hurt by more aggressive actions taken by the US Fed to get inflation back under control at the new target.

Inflation targeting has become a key feature of the investment landscape over the past 25 years.  While the debate over whether to raise inflation targets is heating up, we would still place a low probability of 10-15% on inflation targets being lifted in the next 5 years.  That said, the implications of any change would be wide ranging, so investors need to think ahead and be prepared if these probabilities change.

IMPORTANT NOTICE AND DISCLAIMER
Harbour Asset Management Limited is the issuer and manager of the Harbour Investment Funds. Investors must receive and should read carefully the Product Disclosure Statement, available at www.harbourasset.co.nz. We are required to publish quarterly Fund updates showing returns and total fees during the previous year, also available at www.harbourasset.co.nz.  Harbour Asset Management Limited also manages wholesale unit trusts. To invest as a Wholesale Investor, investors must fit the criteria as set out in the Financial Markets Conduct Act 2013. This publication is provided in good faith for general information purposes only. Information has been prepared from sources believed to be reliable and accurate at the time of publication, but this is not guaranteed. Information, analysis or views contained herein reflect a judgement at the date of publication and are subject to change without notice. This is not intended to constitute advice to any person.  To the extent that any such information, analysis, opinions or views constitutes advice, it does not consider any person’s particular financial situation or goals and, accordingly, does not constitute personalised advice under the Financial Advisers Act 2008. This does not constitute advice of a legal, accounting, tax or other nature to any persons. You should consult your tax adviser in order to understand the impact of investment decisions on your tax position. The price, value and income derived from investments may fluctuate and investors may get back less than originally invested.  Where an investment is denominated in a foreign currency, changes in rates of exchange may have an adverse effect on the value, price or income of the investment. Actual performance will be affected by fund charges as well as the timing of an investor’s cash flows into or out of the Fund. Past performance is not indicative of future results, and no representation or warranty, express or implied, is made regarding future performance. Neither Harbour Asset Management Limited nor any other person guarantees repayment of any capital or any returns on capital invested in the investments. To the maximum extent permitted by law, no liability or responsibility is accepted for any loss or damage, direct or consequential, arising from or in connection with this or its contents.