The OCR has had less influence on retail interest rates since the Global Financial Crisis (GFC) as the RBNZ has required a greater share of NZ bank funding to come from stable sources, such as retail deposits and long-term wholesale debt.

International experience suggests that as interest rates approach zero, banks may be reluctant to pass on very low interest rates to depositors, diminishing returns from additional easing. We see similar dynamics already at play in New Zealand, suggesting that term deposit rates and mortgage rates may not fall much more from here.

Even if the OCR remains effective in lowering lending rates, business surveys suggest finance is not a factor constraining turnover. Lower interest rates can boost consumption and housing investment, but constraints exist in the form of limited household appetite to spend; existing macroprudential measures; and proposed increases in bank capital.

Globally, the policy conversation is shifting towards fiscal stimulus, even though sovereign debt/GDP has risen alarmingly since the GFC. New Zealand is one of the few countries in a strong position to consider increasing debt to support the economy. Microeconomic reform that can help improve efficiency and reduce costs would also be highly beneficial.

The OCR has had less influence on retail interest rates since the Global Financial Crisis (GFC) as the RBNZ has required a greater share of NZ bank funding to come from stable sources such as retail deposits and long-term wholesale debt. The OCR is most effective in impacting short-term NZ wholesale interest rates but, since the GFC, regulatory changes[1] have compelled banks to drastically reduce reliance on short-term wholesale funding in favour of more stable sources where the OCR has less influence. Figure 1 plots the OCR versus 6-month term deposit rates and floating mortgage rates. As banks sought to attract a larger amount of retail deposit funding following the GFC, they were forced to offer higher rates of return relative to the OCR. To maintain margins, those higher costs were passed on to borrowers via higher mortgage rates. 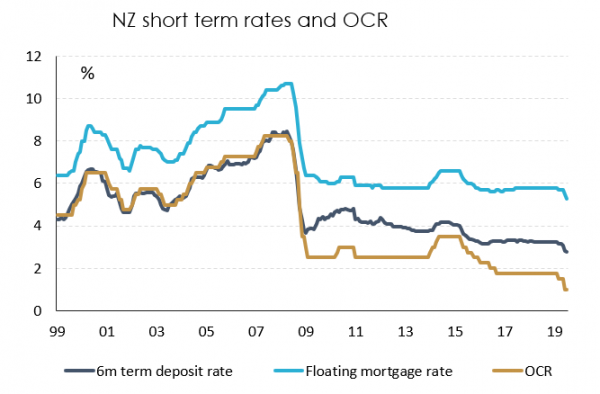 International experience suggests that as interest rates approach zero, banks may be reluctant to pass on very low interest rates to depositors, diminishing returns from additional easing. For example, retail deposit rates in countries with negative policy rates generally remain positive, limiting the ability for lending rates to decline. New Zealand banks have already shown reluctance to reduce deposit rates in line with recent OCR cuts, passing on only about two thirds of the 75 basis points (bp) reduction since April, likely reflecting strong competition for retail deposits. Retail deposits are the main way in which banks meet their core funding requirements (they make up almost 70% of non-equity funding for NZ banks). Banks are aware that the domestic savings pool is limited and saving returns are already low[2]. The RBNZ can more directly impact the cost of domestic wholesale funding but this makes up less than 10% of non-equity funding. Offshore funding, which the OCR has no influence on, makes up the rest of banks’ non-equity funding needs.

Even if the OCR remains effective in lowering lending rates, business surveys suggest finance is not a factor constraining turnover. The Q2 NZIER Quarterly Survey of Business Opinion showed that just 4% of respondents noted finance as limiting their ability to increase turnover (versus 15% noting capacity, 21% noting labour and 48% pointing to demand, see Figure 2). This suggests lower financing costs are unlikely to directly support a rebound in business confidence and instead places greater emphasis on other channels through which lower rates can boost activity. 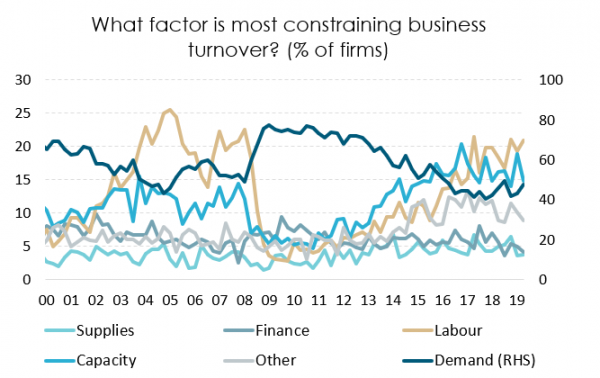 Lower interest rates can boost consumption and housing investment, but constraints exist in the form of limited household appetite to spend, existing macroprudential measures and proposed increases in bank capital. Following falls in mortgage rates, household borrowers will experience an increase in discretionary income that may support consumption if they choose to reduce their monthly mortgage repayments.  While rate cuts only immediately affect the 15% of outstanding mortgages that are floating, the positive tailwind will continue as 50% of outstanding mortgages are due to reprice within the next year (Figure 3). Westpac’s Q3 consumer confidence survey, however, showed the lowest level of confidence in seven years and that households were reluctant to spend - focusing instead on paying down debt. Housing investment will become a more attractive prospect but will remain subject to RBNZ limits on high loan-to-value ratio residential mortgages. 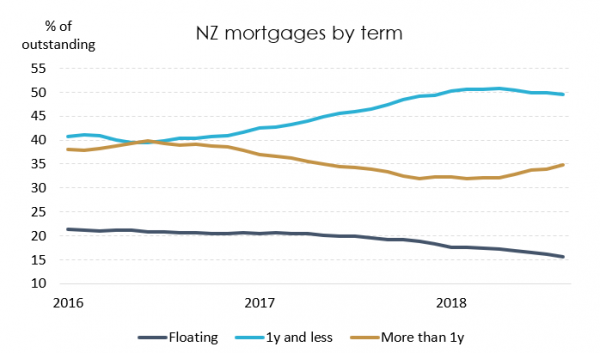 Monetary policy remains the most likely tool to provide further support to the economy, but as returns diminish and risks of unintended consequences rise, we think expansionary fiscal policy should take over given the government’s strong financial position. Market pricing of further OCR cuts is aggressive (c.40bp over the next year) relative to the economic outlook and likely acknowledges the diminishing marginal returns associated with additional easing. If interest rates in the wider economy lose sensitivity to the OCR, the signal attached to additional OCR easing should still weaken the exchange rate, boost activity and lift inflation expectations (Figure 4). Unconventional monetary policy, such as quantitative easing (QE), would likely operate via the same channels but the risk of unintended consequences, such as financial instability, rise.

RBNZ Governor Adrian Orr noted recently that “monetary policy needs friends” and there “remains scope” for fiscal stimulus. NZ’s extremely low government debt and positive credit rating outlook mean fiscal policy is particularly well placed to provide stimulus. NZ government debt is just 20% of GDP, versus an OECD average of about 90%, and the government forecasts large fiscal surpluses over the coming 3-4 years. Greater government spending or lower taxes would likely provide much needed help in boosting economic activity. Standard & Poor’s recent upgrade of the sovereign rating outlook to positive from stable suggests scope for expansionary fiscal policy without significant rating implications (i.e. a ratings downgrade). At present, the Government appears reluctant to move away from their debt/GDP target, but if the economy slows further, it may become politically easier to shift this policy. However, the risk is that this comes late in the day, especially given the unavoidable lags in implementation. The Reserve Bank would prefer something more immediate.

Another avenue that central and local government could use to improve confidence is via microeconomic reform. This relates to regulations and incentives that target the efficiency and productivity of the economy. Streamlining consenting processes under the Resource Management Act is just one example where costs and time could be saved.

In summary, we are expecting the debate around monetary vs fiscal policy to continue in New Zealand and this could intensify if the economy softens quickly. Realisation that retail interest rates will not keep pace with any OCR cuts will also reinforce this debate.

* The transmission of monetary policy easing occurs via several channels with lags of as much as two years:
i) Lower interest rates encourage households and firms to bring forward future expenditure, increasing aggregate demand. Lower borrowing costs (for both new and existing borrowers) encourage increased consumption and investment. Lower deposit rates, reduce the incentive to save, encouraging increased consumption or a rotation to savings vehicles with higher credit risk. Both effects are likely to support housing and equity prices, creating a positive wealth effect that provides further support to consumption.
ii) Exchange rate depreciation increases the NZD price of imports and tradable inflation. It also decreases import demand (encouraging a “substitution effect” to domestically produced alternatives) and increases the competitiveness of NZ exporters, supporting net exports and aggregate demand.
iii) Higher inflation expectations if policy action is viewed as credible. This has a direct impact on inflation via firms’ price and wage setting behaviour.

[1] From April 2010, the RBNZ specified a minimum portion of NZ registered bank lending that must be “stable” and can be assumed to stay in place for at least one year. This core funding ratio (CFR) was initially set at 65% before being increased to 70% in July 2011 and again to 75% in January 2013.
[2] For example, the current inflation-adjusted after-tax return from a 6-month term deposit is just 0.17% for top marginal taxpayers (i.e. those earning more than NZD70,000 and paying a marginal tax rate of 33%).