One of the driving factors behind the global financial crisis (GFC) was high levels of company debt. High leverage and lower earnings coverage of interest costs heightened risk in the US equity market. Recently published research by a global investment bank[i]  suggests that US company debt levels may be creeping up again. But are we seeing the same thing happen in New Zealand?

This isn’t so for all listed NZ companies - but the median NZ company, and the NZ market in general, has displayed significant deleveraging relative to the pre-GFC period, and even on average over the last 4 years.

Importantly this improvement in NZ market debt metrics over the last 12 years has occurred while the proportion of long-lived asset-owning companies (including utilities such as electricity generators/retailers, telecommunications, infrastructure owners and real estate owners) has remained relatively stable at circa 44% of the NZ market in January 2007 and twelve years later in January 2019. The composition of this segment of the market however is now more diversified with further listings in the energy sector. Long-lived asset companies tend to carry higher levels of debt through the cycle than industrial or technology companies reflecting higher earnings certainty. In comparison, similar long-lived companies made up less than 20% of the US S&P Index in January 2007 and in January 2019.

In addition to improving their debt metrics NZ companies have broadened their sources of debt capital when compared to 2007, with a range of NZ’s largest companies accessing credit via debt capital market private placements (including US private placement issues) and issuing bonds to New Zealand-based investors. In addition to diversifying debt sources, the debt capital market has allowed NZ companies to extend the duration of their debt facilities beyond the 5-year term which most trading banks are willing to provide. In debt capital markets interest costs are often only marginally higher for corporates than credit provided by banks. A lengthening of debt tenure term gives businesses more time to adjust to change if required and provides a better matching of long-term cash flows.

There are exceptions to the improvement in debt metrics amongst the larger companies post GFC:  namely Fletcher Building (but last year’s capital raising and the sale of Formica have placed Fletcher Building’s pro-forma balance sheet in an exceptionally strong position), Fonterra (with a capital and strategic change process underway to sell non-core assets) and Ryman (with a ramping up of its Australian development programme over the last three years impacting negatively on income-relative debt measures albeit projected sales over the next few years are expected to improve metrics) have exhibited an erosion in debt metrics in recent years.

The context for Harbour’s research on debt ratios is a December 2018 Citibank global monitor highlighting concerns that US Net Debt EBITDA ratios are 1.6x, higher than the 1.4x ratio of October 2007 (pre-GFC). We felt it prudent to re-examine trends in New Zealand and explore whether companies in NZ had lifted leverage in this period.

The median NZ equity market Net Debt EBITDA ratio was 1.8x as at January 2019 and has been relatively constant over time. While this ratio is higher than in the US, the NZ equity market Net Debt EBITDA ratio includes a larger proportion of long-lived assets relative to the US. Under stable economic conditions with consistent regulatory policies these companies can service higher debt levels through time meaning, on average, the NZ market is likely to be relatively more leveraged than the more cyclical and growth-oriented US equity market.

This research note reviews the leverage ratio (asset to equity ratio, with lower ratios meaning less debt), Net Debt to income (lower ratios meaning lower indebtedness) and interest servicing to income ratios (with higher ratios indicating better ability to meet interest payments on debts), and trends in those ratios between January 2007 and January 2019. In this note Harbour highlights divergences from the median, or companies where the trend has changed materially.

In undertaking a review of the balance sheet metrics for the NZ equity market, Harbour sourced data from Forsyth Barr, Bloomberg and used our own estimates.

Specifically, we obtained Leverage (Asset/Equity), Net Debt to EBITDA and interest coverage ratio data for January 2007 (pre-GFC), January 2015 and January 2019 data. The results of the review are highlighted in table 1: 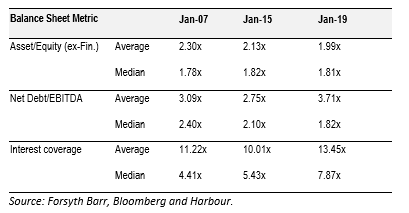 Median balance sheet metrics for the NZ equity market show no trend change in Asset/Equity ratios (1.78x to 1.81x) over the 12-year period. The average leverage ratio has fallen from 2.30x pre-GFC to 1.99x today.

Going forward, International Financial Reporting Standards (IFRS) require that companies capitalise leased assets and include them as a liability on their balance sheets. This will increase leverage levels for some companies including those in the retail sector (capitalisation of property leases) and those that lease equipment (for example capitalisation of aircraft leases). Some New Zealand companies have already complied with this change, others have yet to make the move. As a result, overall NZ equity market leverage ratios may increase as this accounting recognition change is completed.

As a result, other debt metrics may be more useful in defining indebtedness during this transition period.

Since 2007 Net Debt/EBITDA has improved for the median NZ company falling to 1.8x. But the average net debt/EBITDA has risen from 2.75x to 3.71x over the 12 -year period.

As shown in table 2, the main culprit for the increase in the overall NZ equity market Net Debt/EBITDA ratio is Fletcher Building with its Net Debt/EBITDA rising to 18.2x from 2.47x. EBITDA for 2018 reflected a major write down in its Building & Interiors business. On a pro-forma basis, we estimate that Fletcher’s Net Debt/EBITDA will be 0.44x after its recent sale of Formica. This reflects likely net debt falling to $325mn and EBITDA of $730mn. Fletcher may engage in some form of capital management as, arguably, the Formica sale leaves the company with ample room for a buy-back of stock.

Fonterra also has a high net debt to EBITDA position and has the largest net debt of any listed NZ company at $6.4bn. Excluding financial companies, Fonterra is NZ’s most leveraged larger company. While asset sales are likely to reduce Fonterra’s leverage metrics, the company is likely to retain a weak interest coverage ratio relative to the rest of the NZ market unless its return on capital employed improves significantly.

Retirement village sector debt metrics have also weakened as the industry has ramped up production of new units over the last four years to meet the significant demographic-led demand wave (which is supporting increased uptake of retirement living and the sell down of new units). Given the lead time between development and the sell down of units, this ramp up has led to higher working capital requirements and an increase in Net Debt to EBITDA ratios. Ryman Healthcare carries Net Debt of $1.1bn which is expected to rise over the next 15 months to about $1.25bn. This is up from $400mn of net debt in 2015 but is consistent with asset growth. As a result, Ryman’s leverage ratio has barely changed over the 4-year period since 2015. Ryman’s interest servicing ratio has moved to 3.2x, below its long-run average, as its expansion into Australia has required increased working capital (predominantly work in progress). The company is expected to move to a cash realisation phase over the next two years as major projects are completed.

Chorus and Genesis Energy currently carry low interest servicing ratios relative to the market at 2.02x and 1.47x respectively.  However, both companies have very long-lived asset bases that provide a higher certainty of income, albeit Chorus faces some regulatory uncertainty going forward which may impact earnings and the ability for Chorus to service debt and pay dividends.

Figure 1 Net Debt to EBITDA ratios for Chorus and Genesis 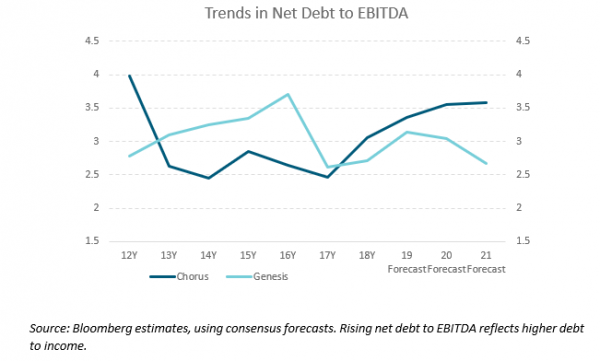 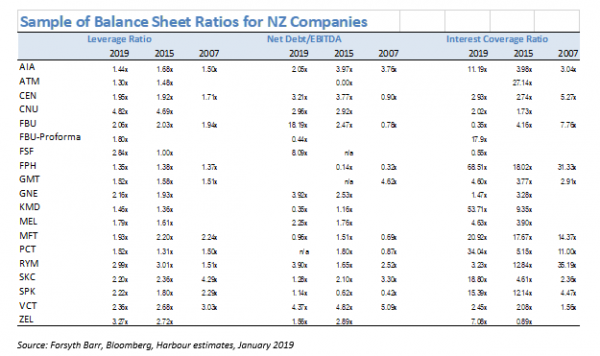 In our opinion, interest cover (the ratio of company earnings to debt interest cost) is an important indicator of a company’s ability to service interest costs on debt and pay dividends to shareholders. This ratio is however cyclical – for this reason it is best used in conjunction with the Net Debt/EBITDA ratio which tends to be a more stable measure of indebtedness.

With Net Debt/EBITDA lower, profitability higher and interest rates appreciably lower since 2007, it is hardly surprising that interest coverage for the NZ equity market has improved sharply with the average and median interest coverage ratios on an improving trend.

On balance, Harbour’s conclusion to this review of New Zealand equity market debt trends is that the median company debt levels are relatively modest and that the NZ market generally has conservative balance sheets.

There is potential for company-specific debt accumulation stress in the NZ market. The key companies we highlight to watch for debt stress include Fonterra (and how they execute asset sales and potentially use recourse to the milk price pool) and parts of the retirement village sector (sell down of new units after a period of accelerated development into strong underlying demand may improve debt metrics).