Despite improving economic outlooks, New Zealand and Australian equities underperformed their global counterparts with the S&P/NZX50 dropping 1.3% and the ASX200 falling 0.4% in October. New Zealand market performance was dominated by weakness in electricity stocks after Rio Tinto announced it was reviewing operation of its Tiwai Point aluminium smelter. Banks led the Australian market lower after ANZ reported a 3% drop in its second half profit. Weaker global manufacturing activity weighed on Australian materials companies. Healthcare, industrials and utilities were the best performing Australian sectors over the month.

Higher NZ interest rates reduced the value of local fixed income assets and the NZ composite bond index fell 0.7% in October. The NZ housing market is beginning to respond positively to record-low mortgage rates and the agricultural sector is enjoying the combination of a weaker NZD and high export prices. Q3 non-tradable CPI inflation increased strongly and, while it was driven largely by increases in regulated prices, represented a large positive surprise to RBNZ forecasts and encouraged the market to reduce easing expectations.

In NZ, subdued business sentiment suggests ongoing lacklustre growth and inflation expectations remain historically low. The NZIER QSBO survey reported a net 11% of firms experienced a fall in activity in Q3 from a net 5% in Q2. Employment intentions remain poor with the ANZ survey reporting a net 8% of firms expect to cut jobs from 0% in June. Investment intentions are also negative (-9% in September from 0% in July). Survey and market measures of inflation expectations remain well below the mid-point of the RBNZ’s 1-3% target range.

Trade: For all the optimism about the “phase one” US-China trade deal, it hasn’t been signed. US tariffs remain in place and are scheduled to be expanded to cover all Chinese imports on 15 December, increasing the average tariff from 15% to 20%. White House communication remains cautious and has highlighted several structural issues that remain unresolved between the two countries. In the UK, the Brexit deadline has been delayed three months, but a no-deal exit remains possible and a general election will now be held on 12 December 2019, adding political uncertainty.

Housing: Historically low mortgage rates are beginning to translate into higher house prices and increased investment lending. The interest rate market is poorly positioned for this to continue and increases in interest rates could be exacerbated if the large amount of upcoming mortgage renewals move to 2-year fixed rate mortgages (the lowest point on the mortgage curve) and banks hedge this risk via paying fixed rates in the interest rate swap market.

Tiwai Point:  Rio Tinto announced that it is undertaking a strategic review of New Zealand Aluminium Smelter’s (NZAS) operations at Tiwai Point, to determine the operation’s ongoing competitive position and viability.   Electricity generator-retailer share prices declined but credit markets took a more complacent view.  We think the risk of potential closure has increased but our base case is that Meridian and the industry will come together with a solution while also trying to achieve a positive outcome for themselves (e.g. contract extension). 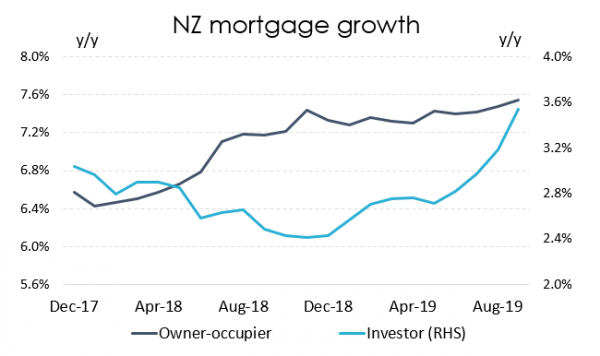 We retain a degree of scepticism in the macro outlook. The global backdrop has improved but remains fragile. Domestically, large amounts of monetary stimulus have been delivered but confidence is poor and activity soft. With this uncertainty an active approach to investment management is required. In equities, the subdued outlook for growth should favour growth stocks and the Harbour portfolios remain concentrated in growth-focussed companies, with a strategy of also maintaining exposure to several larger quality defensive investments.

Within fixed interest portfolios, we reduced duration during October in the context of an improving economic outlook but remain long relative to benchmark given soft economic activity and residual risk. Our greatest conviction remains in the appeal of NZ inflation-linked government bonds and in the poor value of New Zealand government bonds (NZGB) versus US Treasuries (UST). Breakeven inflation rates increased 16-20bp in October but remain historically low (e.g. 10-year c.1%) and should continue to move higher as the domestic economy improves. Even without further capital gain, the high levels of carry make these bonds attractive to hold. The spread between 10-year NZGB and 10-year UST yields narrowed by 19bp in October to less than 40bp but considering the respective movement in RBNZ and Fed rate cut expectations, NZGBs continue to look expensive.

In multi-asset portfolios, we have held our overweight position to Australasian equities. While we are wary of valuations in this sector, we believe these equities look relatively attractive against the backdrop of low interest rates. At the same time, we retain our underweight to global equity markets. While global equities are cheaper using headline valuation metrics, given the heightened global macroeconomic risks, we view it as sensible to take a more cautious approach within global share markets at this time.