The Government has substantially increased its spending plans over the past two months, turning out to be a better friend to the RBNZ in supporting economic activity than most had anticipated. Not only did the December 2019 Half-Yearly Economic and Fiscal Update (HYEFU) unveil a capital spending package worth $12bn (adding 1.4% to real GDP over the next four years), Kāinga Ora  announced on January 19th an additional $4bn of borrowing to help its ongoing state housing upgrades. Kāinga Ora raised its borrowing limit to $7.10bn, from $3.05bn, and intends to use most of this new limit over the next two years to help finance “much-needed warm, dry and safe houses across New Zealand”. In its latest (September 2019) investor update, the government agency planned to build 7,500 new homes over the next four years, and upgrade or replace 45,000 homes (c.70% of current stock) over the next two decades. We noted in September, after the OCR had plumbed new lows, that fiscal policy was better placed to provide additional economic stimulus (see NZ Monetary Policy: Diminishing Returns, 26 September 2019).

While there is uncertainty about delivery, any additional government capital spending is likely to add to inflation via increased construction demand. Faced with rising costs and tighter operating margins, the construction sector must be keen to pass on cost rises. However, strong competition and insufficient demand has made this difficult. The December ANZ Business Confidence survey, for example, showed the construction sector had the second-highest cost escalation, but the lowest intentions to increase prices – a story supported by the December quarter New Zealand Institute of Economic Research Quarterly Survey of Business Opinion (NZIER QSBO) survey, along with property maintenance and home ownership inflation within the CPI. With additional government demand in this area, prices are unlikely to decline. The QSBO survey reported a strong pickup in architects’ pipeline of work for government, likely reflecting the new government spending plans. The recent pickup in house prices and activity is also likely to add to demand in this sector.

We think this materially weakens the case for further RBNZ rate cuts. Activity indicators have picked up in recent months and, prior to the Kāinga Ora announcement, fiscal spending was already forecast to make the largest contribution to GDP over the next two years since 2010. We estimate that the combined impact of government capital spending announced at the December HYEFU, and an additional $4bn of state housing spending (assumed to be spread evenly over the next four years) should raise the November Monetary Policy Statement (MPS) OCR forecast track by as much as 50 basis points (bp) at the Q4 2021 point (from 1.15% to 1.65%), after controlling for the associated crowding out of private sector investment. Rate hikes remain a long way off however, with still-low inflation suggesting the RBNZ can adopt a patient approach. Both the RBNZ’s preferred core measure of inflation (the sectoral factor model) and surveyed two-year ahead measure are 1.8% y/y, below the midpoint of the central bank’s 1-3% target range. 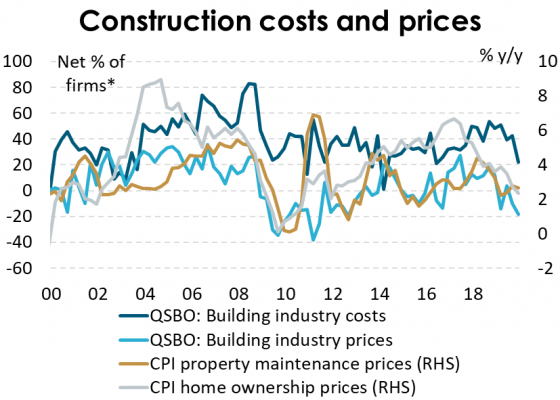 * Net % of firms that experienced an increase in costs and prices.
Source: NZIER Q4 QSBO, Statistics NZ. For reference, property maintenance and home ownership prices make up 3% and 5% of the CPI, respectively. 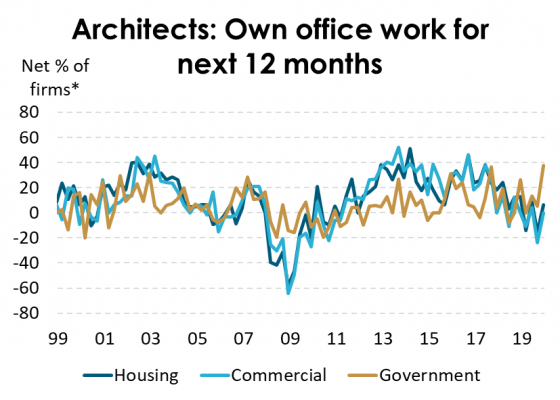 * Net % of firms that expect an increase in own office work over the next 12 months.
Source: NZIER Q4 QSBO. 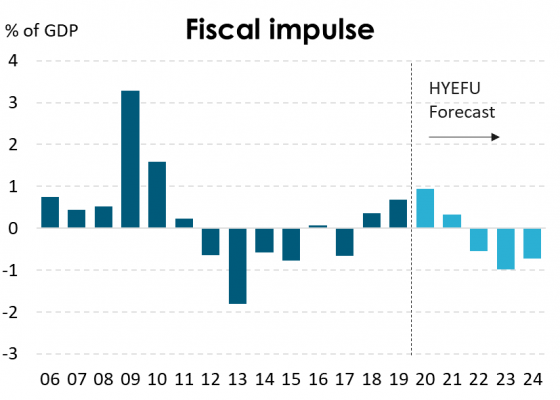