Market expectations of additional monetary policy stimulus, via a lower OCR, have been tied to continued cautious RBNZ communication. Interest rate markets currently imply an OCR of -0.25% in one year’s time. Members of the Monetary Policy Committee (MPC) noted at the 23 September meeting that the balance of economic risks remained to the downside. At a conference in late October, RBNZ Governor Adrian Orr reportedly discounted recent data and indicated a forward-looking focus where inflation and employment are inconsistent with the central bank’s mandate. Orr also reportedly took the opportunity to further encourage banks to prepare for negative interest rates.

The economy, however, has continued to positively surprise the RBNZ’s forecasts and presents a challenge to its uber-dovish stance and the prospect of a negative OCR next year. The RBNZ had expected house prices to fall 3% y/y in Q3 (Quotable Value measure), however they likely increased 9% y/y and do not look like stopping. Q2 Gross Domestic Product (GDP) growth was 2 percentage points better than it had expected and, most recently, the Q3 unemployment rate was 1.7 percentage points lower than its forecast. At the very least, this is likely to translate into a better starting point assumption for the economy and influence the discussion within the MPC. In the extreme, it removes the need for a negative OCR at this juncture. In the 11 November Monetary Policy Statement (MPS), we do not expect the RBNZ to abandon the option to cut rates next year, but it may make it clearer that they retain the option not to cut. Communication to this effect would likely cause some re-pricing higher of short-term interest rates, in our view.

The better-than-expected economic outcomes are also likely to place upward pressure on the RBNZ’s “unconstrained” OCR forecast. This OCR forecast is a model-based solution that is consistent with the RBNZ achieving its dual mandate of 2% inflation and maximum sustainable employment. At the August MPS it was largely unchanged as assumptions of a longer border closure and a higher New Zealand Dollar (NZD) broadly offset the improvement in economic activity and more expansionary fiscal policy (for further discussion see Bond market takes note of RBNZ dovish shift, 18 August 2020). These offsetting assumptions are likely to be harder to find this time around.

The “shadow” short-term interest rate suggests the RBNZ has scope to reduce stimulus. One method that market participants use to assess the overall stance of monetary policy in an unconventional environment (i.e. one where central banks are conducting quantitative easing via bond-buying programmes) is to estimate a “shadow” short-term interest rate using information from the yield curve. Leo Krippner’s method[1] is most used and suggests, at the end of October, this rate was -3.5%, much lower than the August MPS unconstrained OCR forecast and implying scope for interest rates to rise without threatening the prospect of the RBNZ achieving its mandate (see chart below).

The likely launch of a Funding for Lending Programme (FLP) as part of its November MPS decision further reduces the need for additional stimulus. The September meeting minutes were clear – “Members agreed that they preferred to launch an FLP before the end of 2020” and this is the last meeting of 2020. While exact details of the FLP are not known, the stated intention is to lower retail interest rates by providing a mechanism through which banks can lower funding costs by borrowing directly from the RBNZ at an interest rate close to the OCR, currently 0.25%. This is well below the price of other bank funding sources such as term deposits, where 6-month term deposit rates are 0.9%, and 5-year wholesale debt which is currently trading around 0.5% in the secondary market.

In our view, the distribution of future interest rate outcomes has skewed higher. 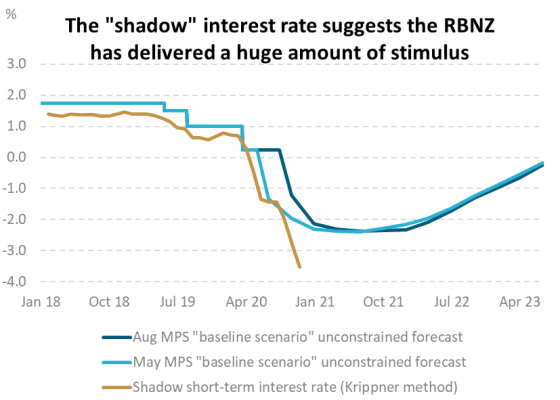