In the economy section of the new NZ government’s Coalition Agreement, the top of the list is “Review and Reform of the Reserve Bank Act”. Given the preference of Labour and NZ First to give the RBNZ a dual mandate for both inflation and employment, the market has interpreted this as implying lower interest rates to encourage job growth.  In our view, while the inclusion of a full employment objective will enable the government to apply political pressure on the RBNZ to focus on jobs, it is not clear that it will result in a permanent bias to lower interest rates.

Adding full employment to the RBNZ’s mandate
Earlier this year, Grant Robertson released “Labour’s modern approach to monetary policy”[1].  It outlined that Labour is fully committed to low inflation and will seek to continue the RBNZ’s current inflation target of 1-3 per cent. However, it also highlighted the desire to add the goal of full employment, which would bring its objectives more in line with other countries such as Australia and the United States. In addition, a committee structure would be put in place, to take OCR decisions out of the hands of a Governor as the sole decision maker. Our take at the time was that Labour’s proposals were very mainstream by global standards.[2]

Since the election, as Prime Minister, Jacinda Ardern outlined in a speech to the CTU that New Zealand has “unemployment stuck stubbornly at 5% when it should be below 4%”.[3]  Many investors and commentators have combined these two ideas – giving the RBNZ an employment objective, and a desire to lower unemployment below 4% - to imply that official interest rates will need to be set lower.

However, Grant Robertson has subsequently clarified that Labour is not planning to set the RBNZ a numerical target for the unemployment rate. In fact, while numerical targets for inflation (typically centred on 2%) are commonplace for central banks, there are no mainstream central banks overseas with a numerical target for the labour market.  Rather, objectives are phrased more vaguely around supporting full employment. In that sense, the sub 4% goal outlined by Jacinda Ardern relates to the government’s overall economic strategy, not specifically to monetary policy. Indeed, it is likely to be driven more by the government’s broader policies targeted on lifting productivity, skills, and regional development.

So how would adding a “full employment” actually change OCR decisions in practice?

The labour market as an indicator of capacity pressures
Under the current RBNZ Policy Target Agreement (PTA), the RBNZ sets the OCR in order to help move future inflation towards the middle of the 1-3% target range.

To make these OCR decisions, there are two key inputs. The first is an assessment of current inflation expectations. The second is an assessment of future inflation pressures, which boils down to a judgement of whether the economy is running hot and facing capacity pressures (which will result in more inflationary pressures) or whether there is ample spare capacity in the economy (which will result in deflationary pressures). 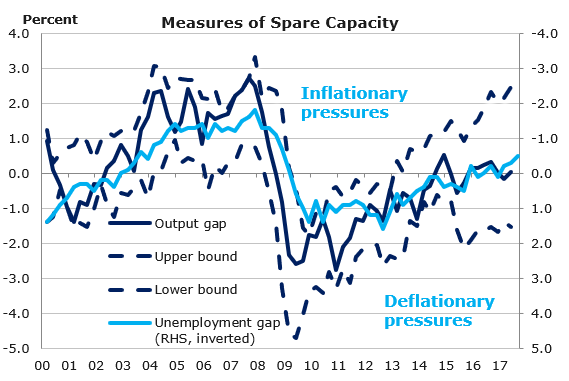 An implication is that if the RBNZ are already monitoring capacity pressures, then adding the labour market to their mandate should not materially change their approach, making them neither more dovish nor hawkish. Indeed, the latest unemployment rate of 4.6% is actually below the long-run average, implying tightening capacity pressures, and on the margin the need for tighter rather than looser monetary policy.

Overseas experience
In assessing the implications of a change in mandate, we also have the benefit of being able to observe the actions of overseas central banks.

The chart below compares the official cash rates of prominent central banks with dual targets (the RBA and US Federal Reserve), against those with pure inflation targets (RBNZ and Bank of England). It illustrates that there is not an obvious difference due solely to the specification of their objectives. The clearer difference appears to be that smaller countries with high external debt (like New Zealand and Australia) tend to have higher levels of interest rates to compensate investors for these risks. Some movements around the level of interest rates are common and driven by global factors (such as the pre-GFC boom and bust shared by all four countries); while other movements in interest rates are driven by domestic factors (like the significant cycles in Australia’s hard commodity prices in 2010 to 2013, and New Zealand’s dairy prices in 2013 to 2014). 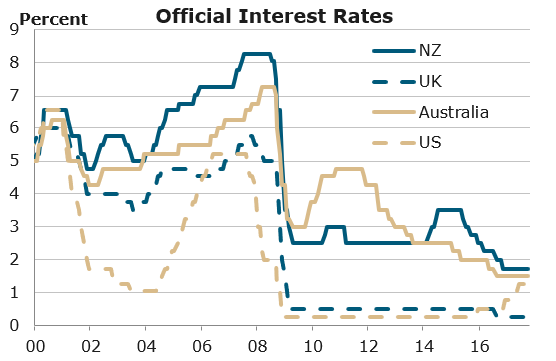 Interestingly, the one country in this sample that is currently lifting interest rates is the United States, with a dual mandate of inflation and full employment. With US core inflation currently stubbornly below target, the main motivation of lifting interest rates in the United States has been an assessment that with the unemployment rate at 4.2% (and back to pre-GFC lows), capacity pressures are starting to bite, and future inflation pressures are expected to build.

Conclusion
The upcoming review and reform of the Reserve Bank Act is widely expected to result in a new dual mandate of both price stability and full employment. While the market has interpreted this as implying lower interest rates to encourage job growth, our assessment of the evidence is that it is not clear that a dual mandate will result in a permanent bias to lower interest rates.

That said, the inclusion of full employment will enable the government to apply political pressure on the RBNZ to focus on jobs, particularly through accountability forums like the public hearings of the Finance and Expenditure Select Committee. Rather than monetary policy, we expect the centre-piece of the new government’s desire to lower unemployment under 4% to be its policies on productivity, research and development, skills and education, and regional development.