In September, there were two main local market events in New Zealand which were somewhat overshadowed by the broader theme of normalising global interest rates.

The first was the hard-fought NZ election, which left no clear government formed on election night.  Consistent with the last 8 MMP elections in NZ, it will likely take some time for a government to form. This process is not a surprise for local nor international investors, and was an outcome clearly signalled in the polls throughout the year.

By international standards, both National and Labour-led governments appear relatively centrist.  Both major NZ political parties have shown solid fiscal responsibility, and the Reserve Bank of New Zealand (RBNZ) will remain independent under both parties. These factors should help markets remain relatively calm throughout this period of uncertainty.

The second domestic event was the RBNZ’s Official Cash Rate (OCR) review. Again there were no major surprises, with the RBNZ holding the line that the OCR should remain on hold for a considerable period. While Q2 GDP growth was slightly softer than expected and the housing market cooling quicker than anticipated, the impact of these factors on the inflation outlook was largely offset by higher solid leading indicators and the weaker NZ dollar.

Yet, despite these local events, the main developments driving markets over the course of September actually came from overseas. First, while tensions on the Korea peninsula have not completely passed, they eased compared to August, and markets became more comfortable with monitoring and managing this ongoing risk. With this change in tone, there was less demand for US Treasuries as a flight-to-safety asset.

Second, President Trump announced a more detailed tax reform plan that seemed to have growing political support, and an increased chance of being passed. With markets having placed a very low probability of Trump making legislative progress following failures in other areas (such as healthcare reform), it was a reminder to the market that Trump may still be able to deliver fiscal stimulus that contributes to the process of economic reflation.

Finally, the US Federal Reserve announced plans to normalise its balance sheet (winding back the impact of quantitative easing (QE) purchases), as well as a continued intention to lift the US Federal Funds Rate through 2017 and beyond. There had been a suspicion that US inflation, surprising on the downside for 5 of the past 6 months, might have delayed these plans. But the vast majority of voting Federal Open Market Committee (FOMC) members stuck to their previous projections, starting with the next Federal Funds hike by the end of the year. While market pricing for a December hike has risen from 40 % to 70% (as shown in the chart below) market pricing (the white and purple lines) continues to sit below the published FOMC member expectations. 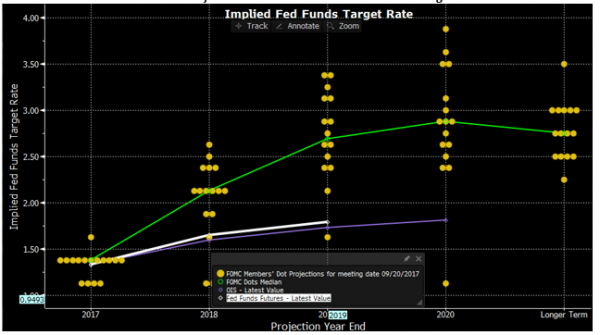 Source:  Federal Reserve Board of Governors and Bloomberg.

As we move towards the end of the year, we are increasingly focused on the global macroeconomic data, how this is affecting the tone of central banks, and the prospects of monetary stimulus being removed from markets.

After several years of unconventional monetary policy (QE, negative cash rates), improving and synchronising growth has returned, enabling central banks to consider a pathway towards normalising monetary policy. In Europe, the U.K and Canada, central banks have either changed their tone or hiked interest rates. It is still early days, but as QE took bond yields so low, the scope for "normalisation" could prompt a noticeable rise in long-term bond yields. The extent of this is certainly subject to the degree to which inflation rises.

There are some signs that the phase of very low and stable inflation may be replaced - not with high inflation, but likely higher than we have experienced over the last decade. 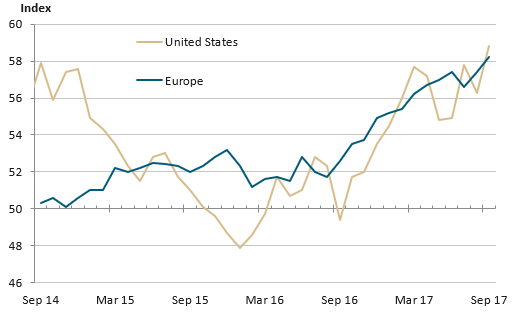 In investment markets, the implications of higher long-term bond yields could be significant. If bond yields rose by 0.50% or more, various sectors, governments and households would feel an impact.  Globally, debt levels are still high. Some risky assets, which have been revalued on the basis of low discount rates, may need to be re-priced at lower valuations. In credit markets, corporate bond spreads may widen. The beneficiaries would likely be gold and inflation indexed bonds.

At this stage, these are risks to be considered, rather than a central scenario. The implications described above will become more realistic if inflation does re-emerge, though this would take some time. It is by no means certain that this will happen, but we see the risks for markets lying more in this direction, as opposed to ongoing low and stable bond yields. Accordingly, in fixed interest portfolios we are short duration at the long end of the yield curve, long inflation indexed bonds and more cautious about credit.

Looking forward, the risk for equity markets centres on the high valuation of some companies, on the potential for growth to fall if political outcomes influence business or consumer behaviour, and on the ongoing disruption from technological change.

In our opinion, while the outlook for equity markets is generally supportive of quality growth companies, risks are rising for a period of higher volatility and dispersion of individual stock returns in coming months. As a result we favour more selective concentrated equity portfolios during this time.

IMPORTANT NOTICE AND DISCLAIMER
Harbour Asset Management Limited is the issuer and manager of the Harbour Investment Funds. Investors must receive and should read carefully the Product Disclosure Statement, available at www.harbourasset.co.nz. We are required to publish quarterly Fund updates showing returns and total fees during the previous year, also available at www.harbourasset.co.nz.  Harbour Asset Management Limited also manages wholesale unit trusts. To invest as a Wholesale Investor, investors must fit the criteria as set out in the Financial Markets Conduct Act 2013.
This publication is provided in good faith for general information purposes only. Information has been prepared from sources believed to be reliable and accurate at the time of publication, but this is not guaranteed. Information, analysis or views contained herein reflect a judgement at the date of publication and are subject to change without notice. This is not intended to constitute advice to any person.  To the extent that any such information, analysis, opinions or views constitutes advice, it does not take into account any person’s particular financial situation or goals and, accordingly, does not constitute personalised advice under the Financial Advisers Act 2008. This does not constitute advice of a legal, accounting, tax or other nature to any persons.  You should consult your tax adviser in order to understand the impact of investment decisions on your tax position. The price, value and income derived from investments may fluctuate and investors may get back less than originally invested.  Where an investment is denominated in a foreign currency, changes in rates of exchange may have an adverse effect on the value, price or income of the investment. Actual performance will be affected by fund charges as well as the timing of an investor’s cash flows into or out of the Fund.. Past performance is not indicative of future results, and no representation or warranty, express or implied, is made regarding future performance. Neither Harbour Asset Management Limited nor any other person guarantees repayment of any capital or any returns on capital invested in the investments. To the maximum extent permitted by law, no liability or responsibility is accepted for any loss or damage, direct or consequential, arising from or in connection with this or its contents.