Global equity markets continued to strengthen in April with the MSCI World index (in local currency) returning 3.8%. Markets were buoyed by the trifecta of a strong US earnings season, signs that Chinese stimulus have had a positive economic impact and, perhaps not unrelated, eurozone growth rates coming in above expectations.

Economic data which came in during April continued to paint the picture of a global economy which, although slowing, is continuing to grow. European data was more encouraging with preliminary GDP growth coming in at 0.4% for the first quarter, which was above expectations. Perhaps most surprising was the beleaguered Italian economy emerging from what looks to have been a short-lived recession. Beijing declared victory on stimulus measures with Q1 growth coming in above expectations, this backed up strong Chinese export and activity data. In the US, solid employment data has all but shaken off recession fears, which ran rampant over the latter part of 2018. Against this backdrop, global bond yields drifted higher over the month.

Domestically, the data had a softer tone with CPI coming in below consensus expectations (though core CPI remains robust). The latest Quarterly Survey of Business Opinion (QSBO) confirmed business confidence remains in the doldrums, though the ruling out of a capital gains tax should provide a boost to sentiment. While data has been somewhat of a mixed bag as the RBNZ acknowledges, the timing and magnitude of interest rate cuts is not a done deal.

Bond yields, which have been a tailwind for the New Zealand share market in recent months, turned into a headwind in April, as bond yields ticked higher leading to relative underperformance of the many bond yield sensitive stocks which comprise the NZ market. That said, the S&P/NZX 50 index managed a strong return, thanks to the index’s largest constituent, a2 Milk, returning 17.2% over the month.  The Australian market fared slightly better, up 2.4% in Australian dollars, with its more cyclical mix of stocks.

The bounce back in share markets so far in 2019 has been considerable with many markets delivering returns well into the teens. Looking back to late last year, many of the tail risks which worried investors, such as a slowdown in China and an aggressive US Federal Reserve, have since abated. Some risks, such as Brexit and the prospect of trade wars have, in aggregate, delivered more good news than bad. This has led to investors feeling more certain about the global economic backdrop and, therefore, company earnings. At the same time, central banks have generally become more dovish leading to low expected interest rates around the developed world. It is against this backdrop we are keeping a wary eye on share market valuations as well as the relative valuations of defensive and growth stocks. 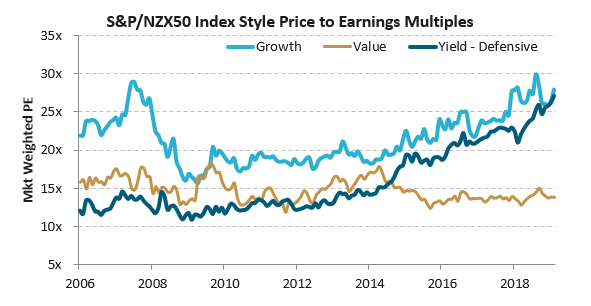 Another factor which has helped drive markets in 2019 has been the assumption that central banks will continue to support equity markets through low interest rates. In the US, interest rate cuts are still priced in despite economic data painting a picture of moderate growth. Domestically, there is the risk that the RBNZ does not cut as quickly or substantially as expected. Some reversal in interest rate expectations could be less supportive of equities, particularly those more sensitive to interest rates.

Over the past several months the economic environment in New Zealand has shifted gradually from one of strong growth, capacity constraints and cost pressures to one of moderate growth, with some downside risk. In Goldilocks language, the porridge was never burning hot: nor is it now stone cold. The Reserve Bank has kept the OCR at 1.75% and tweaked the bias from tightening to easing. This seems sensible to us. Since November the 2 year swap rate has rallied from 2.4% to 1.6%, with the OCR priced to fall to 1.3% by March 2020. This would be a new record low official rate, at a time when NZ is judged to be near full employment and CPI very close to target.

Within fixed interest, we have decided to shorten duration in the 1-3 year sector that is most sensitive to domestic policy changes at times when we have judged pricing is excessively skewed towards rate cuts.  The Fund retains its ongoing and large position in inflation-indexed bonds.

The market for corporate bonds has been quite stable, with spreads largely unchanged year-to-date. The recovery in global equity markets has helped reduce any fears that slower growth may prompt weakness in credit markets.

Within equities, we believe NZ and Australian company earnings growth is likely to remain positive but there is likely to be an increasing disparity in outcomes reflecting the maturity of the profit cycle, with companies that miss against expectations penalised more severely than they have been over the last year. Given this view, and our ‘not too hot, not too cold’ monetary policy setting expectations the balance of probability favours local equity markets continuing to grind higher.

We continue to favour companies that benefit from structural growth drivers over those that need cyclical growth. In particular we favour companies that benefit from five megatrends of demographics (including retiring boomers, consuming millennials, urbanisation and infrastructure), healthcare (growing spend and advancements, technology (rapid change and rate of adoption), growing middle class Asian consumption (including a focus on higher quality and travel) and sustainability (including environmental and social practices). The portfolio remains underweight against its benchmark to low growth, relatively bond yield sensitive stocks in the utilities and real estate sectors.

In multi-asset portfolios, we have removed our overweight position to equities, reflecting the more cautious outlook and increased valuation levels. We favour global equities over domestic due to favourable valuations and less yield sensitive sectoral composition.