The outlook for New Zealand’s fiscal policy is coming strongly under the spotlight and is looking to be an increasingly important factor as we move towards 2019. A key consideration for the government will be how - in an environment where economic activity is moderating - they navigate providing the short-to-medium term fiscal stimulus required for their policy agenda while keeping to their long-term fiscal responsibility rules.

A key theme through 2018 has been increasing evidence that the economy is reaching a crossroads, with a potential end to the mix of strong economic growth and low inflation experienced since the GFC. Leading indicators point to real NZ economic activity moderating from a pace of 3.5-4% in recent years to a current pace closer to 2.5%.

The mix of economic activity is also changing, with a moderation in business’ own activity surveys, slowdown in the housing market, a turn in net migration, tighter credit conditions in the banking sector, and late cycle capacity pressures constraining sectors like construction and tourism. This has left the main sources of domestic growth in the period ahead as solid trading partner growth, elevated terms of trade, loose monetary policy and expansionary fiscal policy.

After a period of fiscal consolidation following the GFC and Christchurch earthquakes, the government’s contribution to GDP growth has been forecast to turn into a tailwind in the years ahead, as surpluses provide scope to loosen the purse strings. This was projected to happen under either a National or Labour-led government. The main difference being the mix: with National planning to provide tax cuts; and Labour planning to target their impact through government spending programmes.

While providing fiscal stimulus to the economy, the Labour-led government has been eager to also reassert its fiscal prudence and credibility by outlining its five Budget Responsibility Rules. These amount to:

With an increased spotlight on indicators that the NZ economy is slowing, the media and economic communicators have highlighted a potential malign scenario, where a fiscal tailwind turns back into a fiscal headwind.

In this scenario, the economy continues to slow, putting pressure on the NZ Treasury to revise down their GDP growth forecasts, which puts potential downward pressure on fiscal surpluses and upward pressures on measures of government debt to GDP. To the extent that, for political reasons, the government is determined to stick to its self-imposed fiscal restraints, then fiscal spending plans would need to be cut or curtailed, exacerbating the economic slowdown in a type of vicious circle.

However, there are a few offsetting factors that could result in a more manageable benign scenario. First, rather than real GDP growth, it is nominal GDP growth that drives tax revenues received by the government. So even if real GDP growth moderates, with signs of core inflation and wage growth picking up, nominal GDP growth may remain relatively solid, providing a continued healthy tax base. Furthermore, as nominal incomes rise, there would be the additional positive effect on the tax take of earners moving up the tax brackets.

There are also some offsets on the expenditure side. One of the reasons that real GDP growth is moderating is capacity constraints in construction, infrastructure and housing. Those same capacity constraints may also naturally delay the government’s expenditure on public sector investment projects, reducing the chance of the fiscal responsibility rules biting. In other words, it lessens the likelihood that projects need to be actively cut or curtailed to fit within self-imposed fiscal constraints.

At the moment there is very little sign that global investors are concerned about New Zealand’s long-term fiscal credibility. New Zealand’s government debt to GDP sits as one of the lowest in the developed world, making New Zealand a standout for fiscal strength.

Chart 1. Government debt as a percent of GDP 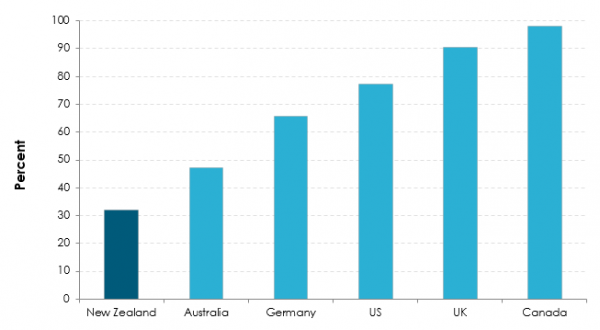 A similar message comes from the government bond market, where New Zealand’s 10-year borrowing costs have fallen below the United States for the first time in nearly 25 years. 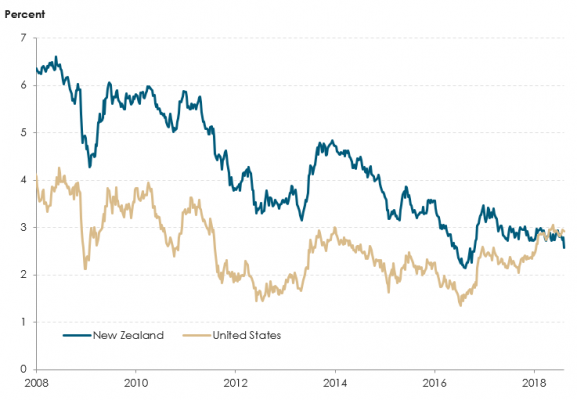 While we believe that financial markets would be fairly sanguine about the government relaxing its self-imposed fiscal restraints, we suspect that the government would be very hesitant given the political optics. With the Labour-led government only having been in office for around a year, it would appear too soon to tinker with the anchors to long-term policy goals. This approach is consistent with the previous National government’s resistance to discarding its fiscal targets in 2016 when it looked like the economy may require additional stimulus to avoid deflation, at a time when the RBNZ was running out of traditional tools as the Official Cash Rate approached its zero bound. [1]

Our own central case for the New Zealand economy is a moderation in economic activity, rather than a more material slowdown. While the mix of economic activity is changing, and some sectors are cooling, low interest rates, a low NZ dollar and strong terms of trade are providing a continued base of economic growth.

Our expectation is that it would take a much more significant change in economic circumstances for the Labour-led government to change its near-term plans for fiscal stimulus or long-term fiscal responsibility rules. Rather than the ebbs and flows of the economic cycle, it would more likely require an event outside the government’s control, like a global recession, earthquake or agricultural disaster. Even then, there is scope to retain their long-term fiscal targets, but to extend the current 5-year timetable to achieve the targets.

[1] Harbour Investment Horizons, “Is it time to talk about unconventional fiscal policy?”, May 2016.